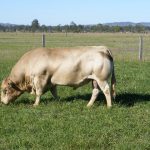 Square Meaters, a home grown success story which owes its origins to Australia’s first developed beef breed, and its future to the pursuit of new levels of efficiency in premium beef production.

The story of Square Meaters actually began early last century when a line of grey calves were born at the Sutherland family’s Thologolong property in the Upper Murray. Thanks to the determination of Ena Sutherland and her daughter-in-law Helen these curious grey cattle descended from a roan shorthorn cow and a series of different angus bulls and were line-bred rather than slaughtered. Over time they earned a reputation for their quick growth, superior feed conversion and carcass merit. In the early 1960’s the Murray Grey Beef Cattle Society was formed to register the cattle, and to administer the breed.

The arrival of European breeds of cattle in the 1970’s and 80’s had a dramatic impact on the Australian cattle industry. Within only a few generations the early maturing types which had so dominated the sector for so long had given way to much larger animals which took longer to finish for market. Ironically a breeder who had helped drive that ‘bigger is better’ mantra, Rick Pisaturo, would also be one of the first people to see some flaws in the sizing up of the herd.

In the early 1990′s Mr Rick Pisaturo determined that a market existed for a specific type of beef animal specifically a breed that was fast growing, well muscled with an even fat cover but very importantly early maturing. Square Meaters are also recognised for their quiet disposition with the cows having a good supply of milk which makes for a healthy, quick growing calf. By the meticulous selection of older style pre-1970’s Australian Grey bulls and females he produced the world’s first Square Meaters calves at his Mandalong Stud in 1994.

Square Meaters breeders have been punching well above their weight when it comes to proving the worth of the breed with excellent results in hoof and hook, carcass competitions and sale yard results in all states across the country.